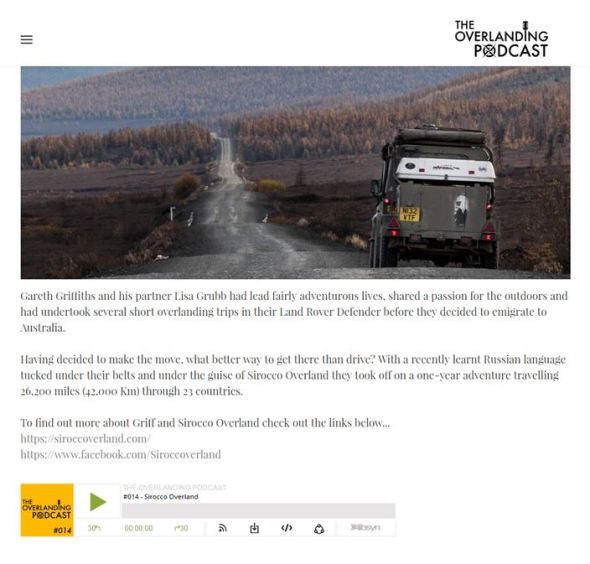 A few months ago we were lucky enough to be invited to attend a podcast recording with Andrew from The Overlanding Podcast. It was great to sit around his virtual campfire and chat about all of our overland travels from Morocco through to our big trip getting to Australia. I had to dig deep into the memory to recall some of the details but it was great to discuss all things overlanding. If you have a spare hour, pop the kettle on, plug in the headphones and give it a listen. Apologies for the sniffles, I was quite ill the day of recording.

Off The Road – Our Story 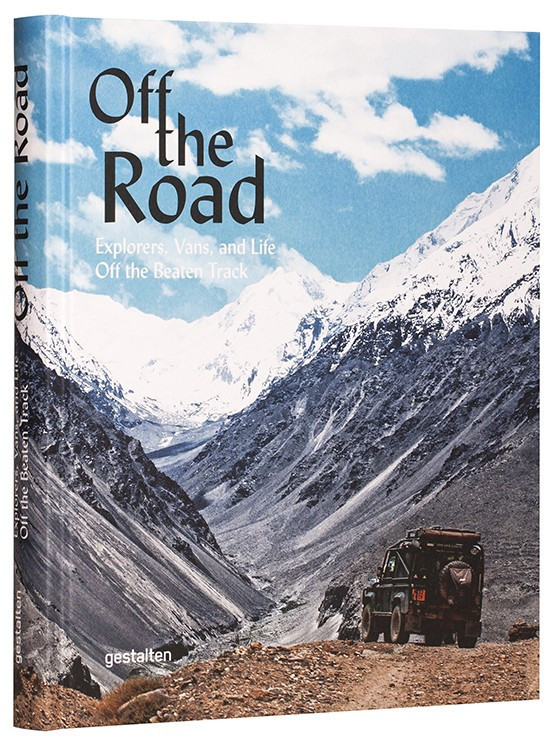 If you have been following along on Facebook or Instagram recently you might have heard that our story has been published in a book by Gestalten (yes, a real paper, hold in your hand, book!). But it is not just us, there a several other travellers stories filling this book with great adventures from around the world. We were however lucky enough to score the front cover.

Many people have been asking where to buy the book from. I am not really best placed to answer this question as we really have no input on the book or its publishing, we have merely contributed our story and photos.

You could always support your local book store and go directly there. The ISBN is: 978-3-89955-594-3 which should make finding it a whole lot easier.

For those in Europe you could buy it online direct from Gestalten:

For those in Australia you could buy online from Langsom:

Off the Road – Explorers, Vans, and Life off the Beaten Track

To find a store in your Country/State/City have a look on Gestaltens site here: 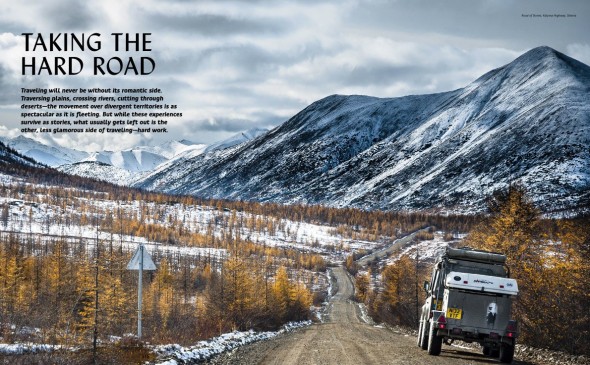 This years adventure is taking a slightly different approach to ‘Overland Adventure’. It’s still Overland, just not as we usually do it.

The Overland Track is Australia’s most well known, multi-day alpine walk. It’s a 65 km, six-day trek through the heart of the Cradle Mountain-Lake St Clair National Park, part of the magnificent Tasmanian Wilderness World Heritage Area. The stunning scenery and the physical challenge of the Overland Track have assured it a national and international reputation as one of the great wilderness bushwalks.

The trip came about because my friends Simon and Edwina decided it was a good idea to do this in winter. With less people on the track there would be more wilderness for us to enjoy. Sure its going to be harder with the cold weather and snow but it will be worth it.

The nature of the trip demands that you carry all your gear and supplies for the 6-7 day duration. In winter the bulk of down sleeping bags, clothing and fuel for the stoves soon adds up. My estimated bag weight currently sits at 20kg which includes snow shoes.

On the lead up to the trip I have been watching the weather and track reports with a close eye. The weather has become increasingly inclement with Tasmania experiencing its coldest and most snowbound winter since the 80’s. Many roads have been closed across the country and there have been snow drifts of 60cm reported at Cradle Mountain with temperatures around -5˚c. Still, we are keeping optimistic and hoping the track will remain open when we arrive later next week.

We arrive into Launceston on the 15th August and hopefully getting the bus to Cradle Mountain on the 16th. With all being well we finish the walk the following Sunday and leave Hobart on Monday 24th.

Keep an eye on Facebook and Instagram for updates and photos as I am sure this is going to be another eventful trip for Sirocco Overland!

It was early July, primetime for outback travel in Australia. I was meeting up with a man who I had never met, taking his Land Rover and driving it nearly 3000km across five of Australia’s eight states from Melbourne, across the Simpson Desert to Alice Springs for him. Sounds odd doesn’t it?

END_OF_DOCUMENT_TOKEN_TO_BE_REPLACED

It’s long overdue. Some people would have forgotten, but we haven’t. Many, many people contributed to our trip in a plethora of ways before, during and after. It’s taken a lot of drafts and few months to get it right, but hopefully this published version is it… Complete, in its entirety.

The seed for this post was planted three nights after leaving the UK. Already we had experienced overwhelming hospitality from Kurt and Mel in Bremen, and it was while staying in Copenhagen with Sara, Kim, Peter and Mela that we realised that the heart of our journey would be the people we met along the way.

So here you go, the list, in order of appearance and a huge thanks from both of us.

END_OF_DOCUMENT_TOKEN_TO_BE_REPLACED

How we took on the infamous Road of Bones during one of the wettest years in history, finally reached Magadan and then headed for Vladivostok, our final port of call.

After the Pamirs and Afghanistan, Russia’s Far North East held the next greatest allure for me personally. Motorbike accounts of the Old Summer Road and Magadan, the photos bringing to life the generosity of the people, the isolation, the remoteness, the raw beauty of the Taiga, the history, the Gulags, the ghost towns… I had to be there myself. I had to experience this. 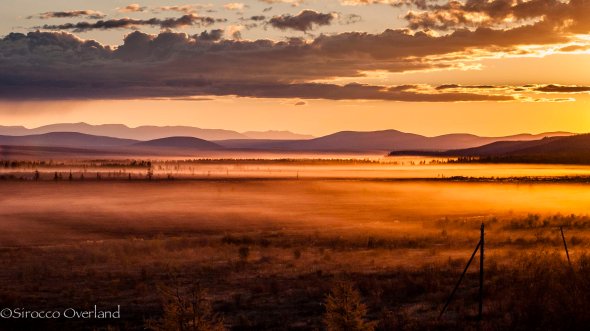 END_OF_DOCUMENT_TOKEN_TO_BE_REPLACED

Good Things Come To Those Who Wait… 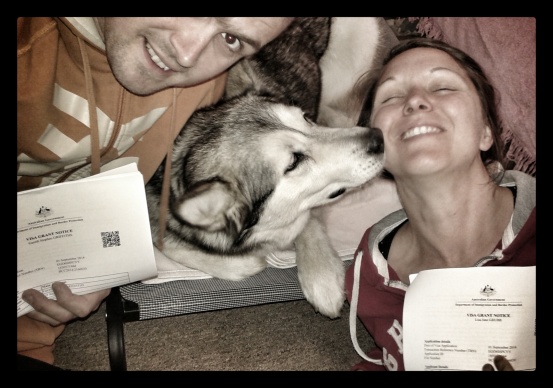 The last few months have been pretty quite around here as we waited around for our Residency Visas to be granted but now, we are happy to say, the wait is finally over. On the 7th of November we were granted the Permanent Residency we have been chasing for the last 12 months. END_OF_DOCUMENT_TOKEN_TO_BE_REPLACED

Its been a long road. Not the 42,000km covered in 2013 but the formalities throughout this year, of  wanting to spend an extended period (more than 12 months) of time in Australia. 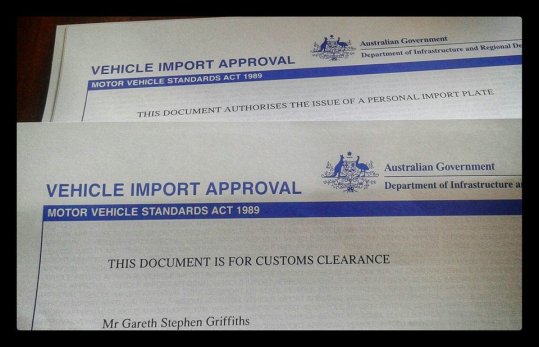 Vehicle and Trailer Approved for import

END_OF_DOCUMENT_TOKEN_TO_BE_REPLACED 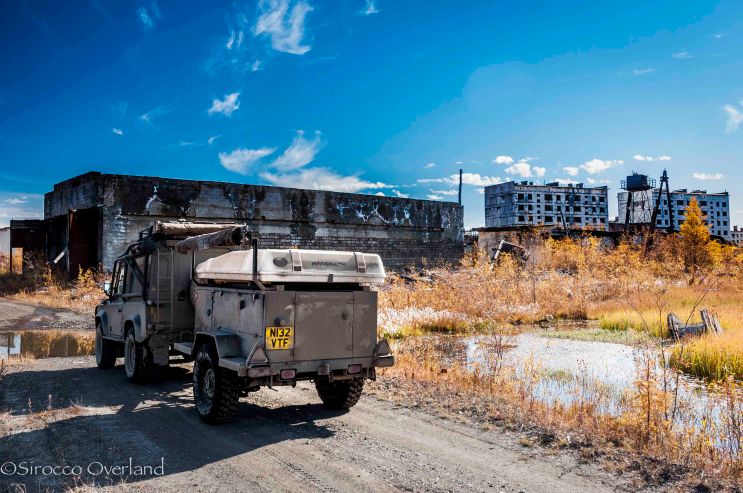 Where Little Boys Fear to Tread

We are very pleased to announce that our second published article is now up on the Expedition Portal for viewing and can be found here:

ExPo – The Lost City of Kadykchan

Article – The Lost Fishing Fleet of the Aral Sea 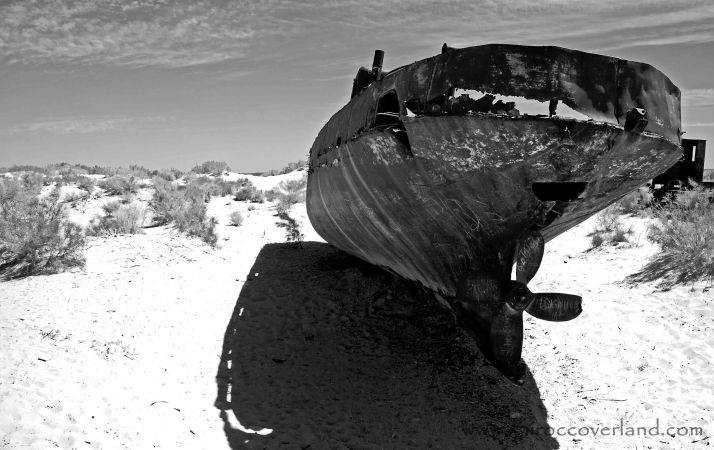 We are very pleased to announce that our very first published article (other than interviews) is now up on the Expedition Portal for viewing and can be found here:

ExPo – The Lost Fishing Fleet of the Aral Sea

The article was written in whole by us using several of my photos to tell the story.

There was an error retrieving images from Instagram. An attempt will be remade in a few minutes.