Our collection of the top 10 most memorable, but not always the best, wildcamps from 2013. Each was chosen for a reason and has a story behind it. There were many more like these often in similar landscapes but these are the pick of the bunch.

Early on in the trip we had a lot of difficulty finding places to camp. None of the campsites were open and reasonably priced hotels were hard to come by. We spent a considerable amount of time trying back-roads and finding places that had been ploughed to remove the build up of snow. We pulled into this closed campsite with the idea that if we found nobody we would simply pop the tent up and stay the night. We hung about for 10 minutes or so until a chap popped his head up and we thought we were going to be shown the door. We asked if he minded us setting up the roof tent and spending the night there and he said that was fine, or… we could sleep in a replica viking hut 500m into the woods!

We trekked in our sleeping bags, Thermarests, cookware, firewood and other ancillaries and settled in for a cold night. The fireplace worked well with the door open but when we blocked it off it would smoke out the room. It was a shame as it was so cold with the door open! It dropped to -17 that night as we slept on an elevated wood platform.

Struggling to find somewhere to camp the night before we went to the Gransfors Bruks Axe Forge, we found this little ploughed spot on the edge of a country road circling a lake. We tucked ourselves into the snow bank and got some well-earned rest. It was a beautiful spot and a great couple of days in the area. We spent the next night at Rike Per in Bergsjo (http://www.rikeper.com) where Petra and Mark looked after us. Fantastic B&B, highly recommended if you’re in the area. We felt thoroughly spoilt after! 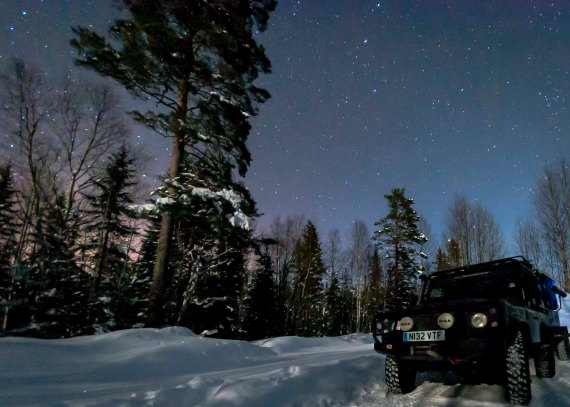 It was pretty difficult to get out of sight of the road crossing the dead pan flat of the Kazak Steppe. We had to drive 2 or 3 km to get away from it. I took the opportunity to try out my new carbon fibre tripod and get some star trail photos done. It was very peaceful sleeping out in the desert on the fringes of the Caspian Sea.

Three years prior to the trip the Pamirs became my main focus alongside Siberia. I became completely engrossed in the history of the area, the people, the geography and the geology. Finding old soviet maps online, I could see old fortifications, pathways, springs and lakes. After leaving Dushanbe the Pamirs beckoned. This was it. We were a little early in the season; we had to be, to ensure we got into and out of Siberia before winter. We ended up travelling with Adam (Shortwayround.co.uk) as we wound our way into the clouds, climbing mountains over 3000m ASL. The following day we battled landslides, gave lifts to locals and watched heavily loaded trucks trying to negotiate washouts and rockfalls. We had spent all day covering only 90km. We finished the day by camping on the flood plain of the River Panj overlooking a village in Afghanistan. For so long I had been dreaming of this, visualising what it would be like and now we were finally here. I was overcome with emotion that day, not something that happens to me on a regular basis and that is why this wildcamp stands out.

The reality was it rained all night, we didn’t bother cooking and the three of us just stood around under the awning drinking tea and biscuits. 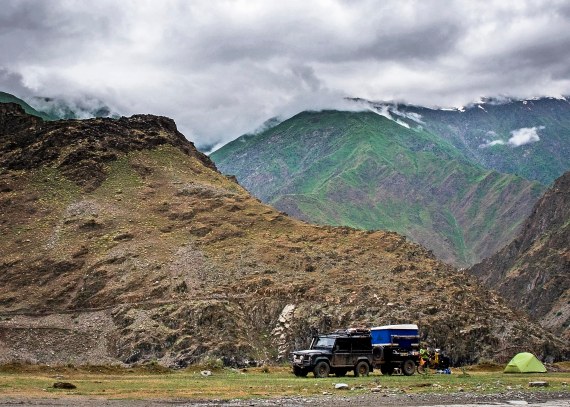 Tajikistan – Alongside the Panj River & our first glimpse of Afghanistan

The classic wildcamp. We came off the road early and found this spot next to the lake. When we have plenty of time we like to pull the wood burner out. We sat in the setting sun making cottage pie on the fire, a great wildcamp setting.

Kyrgyzstan – On the shores of Issyk Kol

Another wildcamp with Adam. This time in the depths of the Russian Altai beyond the permit zone. We got a bit stuck that day trying to pioneer a new route/shortcut. It didn’t work so we headed back to the river at the start of the exploratory section. That night and the following day we spent chatting, catching up and enjoying the sunshine. Another great camp with a mate.

Deep in the Altai – Back with Adam

The final night wildcamping with “the Frenchies” Ivan and Katia (www.ikasfilm.com). We had spent every night with them for the previous 10 days or so. In close proximity we travelled together, ate together, drank together and laughed together as we crossed unchartered routes through the southern Gobi Desert in Mongolia. As we made our way north to UB this was our last wildcamp together. It was a night of celebration from good times on the road, times we will never forget. 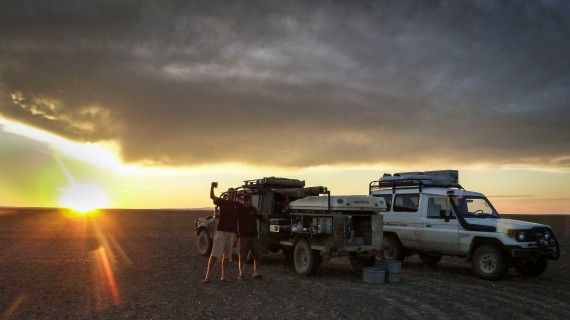 Mongolia – The last wildcamp with the Frenchies

Remembered for maybe the wrong reasons but everything came together in the end so I now look back on this as another iconic wildcamp in Siberia. This was a disused sand quarry on the route from Mirny to Yakutsk. It is the only road in and out of these two towns and at 1250km long it takes a few days, especially when its constantly raining. There is no asphalt and there are five river crossings which often result in long waits for the barges to turn up. We were most of the way to Yakutsk at this point but the sandy route had destroyed another set of rear brake pads down to the metal. I set about fitting our emergency set (down to 4mm thickness), which went well considering. Then I spotted a nail in the tyre! So I deflated it, fixed it with a speed seal and re-inflated. All back together between collecting firewood and keeping the fire going whilst Lisa cooked just before darkness. It wasn’t a bad spot to spend the night.

Another Siberian camp. This was on the Kolyma Highway, on a section of the Road of Bones, alongside a wide part of the river. It was on our return from Magadan. Since leaving Yakutsk for Magadan and back we had wildcamped for 10 nights and covered some 4000km. It was a tough leg of our journey and the most isolated and memorable. Magadan is really ‘out there’. This picture represents most of our nights on this route as the winter started to set in and temperatures started to drop, snow began to fall and ice began to form on the puddles and rivers.

Siberia – one of many campfire cookouts

Between Yakutsk and Tynda – Siberia

This will forever be know as our worst wildcamp ever! The route from Yakutsk down to Tynda is completely sandy, with few asphalt sections and was a bit of a challenge in places when the rain poured. We had not had a chance anywhere to wash the rig and the roads were making a real mess of everything. We had to hand wash the roof tent just to open it. After driving all day on blown rear shocks (and for the next week) with the trailer starting to fracture in places, the mud and sand was getting into and on everything and we were finding things hard. Eventually we made it to the Trans-Siberian Highway and things got a little easier but it was still tough with a broken rig. This was a ‘food and bed’ wildcamp, I’m surprised there is even a photo!

This entry was posted on 14/04/2014 by Griff. It was filed under Overland Adventure and was tagged with camping, Gransfors Bruks, Norway, Overland, Siberia, snow, Sweden, wildcamps.