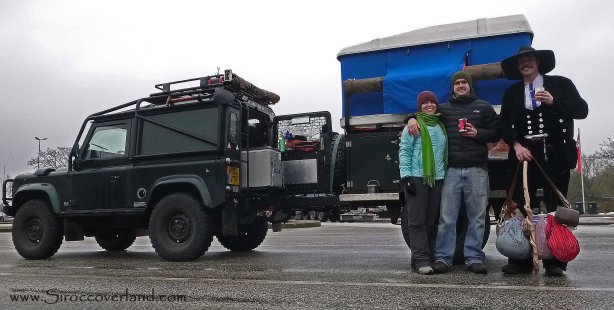 Not long after leaving the UK we stopped in a German truck stop to make a hot coffee and to dry out our soaking rooftent (our last night on home turf was an extremely wet one). Not long after setting up, an extremely tall, strangely dressed gentleman named Andreas wandered over to say hello. And I mean gentleman. He was very polite and friendly, and spoke fluent English. He explained to us that he was a Journeyman, a craftsman (carpenter in his case) who has finished his apprenticeship and, after three years gaining experience throughout Europe and the UK, was returning home to Germany. He was seeking a lift, which we couldn’t offer (we only have two seats) but welcomed a cuppa instead. He had his own utensils, including a spoon he had made himself!

Andreas told us of the tradition of the Journeyman, which has been lost in many other countries such as the UK, where apprentices who have completed their formal training in their craft need to follow up with experience in other workshops. This enables them to register with their respective guild, become a master and open their own workshop. Depending on the craft this journey lasts two years and one day, or three years and one day, and the traveller may not come within 50km of his (or her) hometown within that time, emergencies aside.

The uniform is important, as it distinguishes them from the homeless or other travellers (as well as ID and a secret handshake!). This, along with impeccable manners, is crucial, as they rely on free accommodation and lifts from people they meet. They are only allowed €5 in their pocket when they leave and must have the same amount on their return, and they carry all their belongings in leather Felleisen (backpack) or cloth bags. The black hat, waistcoat and bell-bottom trousers are classic carpenter Journeymen attire, although other crafts have also started using it as it is more recognisable. The Stenz, a traditional curled walking stick, completes the ensemble.

Fascinating to learn about, and we felt extremely privileged to meet one. Good luck to him, and his fellow Journeymen.

This entry was posted on 20/06/2014 by Lisa. It was filed under Photo of The Week and was tagged with apprentice, carpenter, craftsman, felleisen, Germany, Journeyman, Photo, Photography, stenz.