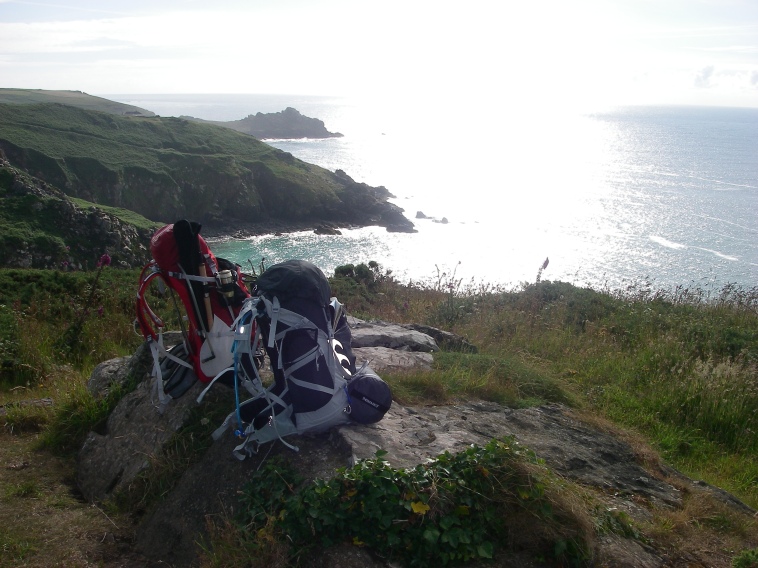 In the summer of 2010 we took a week off to walk along part of the 630-mile South West Coast Path, which runs along the entire coastline from Minehead in Somerset to Poole Harbour in Dorset. We took the train to St Ives in Cornwall and walked the 40 miles to Penzance and the mystical St Michael’s Mount. This photo was taken near Zennor on the north coast, only about 6 miles into the walk and still relatively fresh and clean! Our backpacks contained everything we needed to camp along the route as there are few accommodation options along this part of the Path.

The Cornish coastline is still one of my favourite places in the world, with it’s dramatic rugged cliffs surrounded by crystal clear waters. Our walk took us past ruined mining stacks at Pendeen, up and down rocky ravines and across some of the country’s best beaches. We paddled at Cape Cornwall, had our photos by the famous signpost at Land’s End and visited the open-air Minack Theatre cut into the cliffs at Porthcurno. Our nights were spent in the tent listening to the waves, or the haunting foghorn from the lighthouses when mists took hold. On our last night we treated ourselves to a B&B in the small village of Mousehole, where we stumbled into the Sea, Salt and Sail Festival – beer, wine and food served on the harbour walls while local bands played Cornish shanties and people danced! The perfect end to a perfect week.

This entry was posted on 06/06/2014 by Lisa. It was filed under Photo of The Week and was tagged with backpacking, camping, Cornwall, Land's End, Photo, Photography, South West Coast Path, Travel, UK, Walking, Zennor.