Into Afghanstan – Eshkashim, The Wakhan Corridor and the Hindu Kush… but not with the Land Rover

How we spent a lot of time on the Ishkashim border, got stuck in no-mans land, had to leave the Land Rover with crazy Tajik police and got a military escort into town.

…and hatched a plan to re-new our 15 day import permit.

The Plan: pick up our Afghan Visas at the consulate in Khorog, drive to the border at Ishkashim, exit the country fully using the second entry on our Tajik Visa and return the same way thus renewing our temporary import document.

END_OF_DOCUMENT_TOKEN_TO_BE_REPLACED

Tajikistan – Dushanbe, the Pamirs and the Wakhan Corridor Part I

How we spent a lot of time in Khorog, Got very wet in the Pamirs and hatched a plan to re-new our 15 day import permit.

Prior to leaving, the Pamirs was big on my list for exploring. Alongside Georgia, for me, it was to be one of the highlights. Big mountain scenery, alpine landscapes, dirt roads and isolation. I managed to track down a full catalogue of old Soviet maps scanned in detail and saved as JPG’s thanks to the guys at Berkley University (US) and Google. Lots of things in the region have changed but the old maps gave the sites of ruined forts and numerous roads constructed for military use. I would spend hours on the laptop at home looking at potential roads and piecing together our plan for the Pamirs.

Over the pass – Tajikistan

END_OF_DOCUMENT_TOKEN_TO_BE_REPLACED

5 months on the road – Progress So Far…

With the use of our daily tracklogs from our Garmin GPS our GIS man (Jack Pitts) back home has pinned together our route from landing in France (I don’t need a GPS to find Dover from Swansea 😉 ) to Bishkek in Kyrgyzstan.

check out our Interactive Map here: Progress So Far

There are a few gaps in the tracklogs which we will work on to iron out for the next stage of the mapping progress.

Uzbekistan – The Silk Road Cities and near-death in Bukhara

How we found the Aral Sea, ate Camel meat and got ourselves in a spot of trouble. 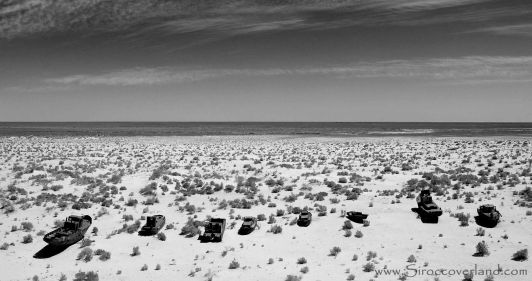 I will just start this post by apologising if it unfairly puts Uzbekistan in a bad light. It was probably not Uzbekistan’s fault that we had such a rough time of it, but we have blamed the country purely on circumstantial evidence – we were fine before and have been since! This doesn’t encompass the Uzbeks themselves, as they were warm and friendly. And there’s more than likely a massive part we ourselves played in making things difficult for ourselves, as will become clear.

It started with a seven-hour border crossing, which in the burning midday sun was not one of the finer moments we’ve had on the trip, it must be said.  END_OF_DOCUMENT_TOKEN_TO_BE_REPLACED

You have driven hundreds of kilometres all day on dirt tracks, corrugated and potholed tarmac roads, been stopped five times by the police for ‘documents’, then an unfamiliar noise emanates from the engine bay. Your still 10 km outside of an unfamiliar town looking for somewhere to stay that has secure parking and won’t blow your daily budget. You wouldn’t be here if you didn’t need that damn (delete as appropriate) Visa/Registration Document/Permit/Customs Form/Flight Ticket/Spare Part.  It’s the usual battle.