Russia: Bad police, bad drivers, bad service and bad food, right? Maybe these stereotypes were the reason Russia exceeded all our expectations. We had heard of Russian hospitality, but thought this would be limited to the rural areas of Siberia where there were sparser populations. We never expected our transit through southern Russia to be so warm and memorable.

Ok so the cities had some of the soviet blocks for housing in some places, and a few of the receptionists (all strangely named Svetlana) didn’t want to waste their time talking to us when nails needed filing. Not to mention a few people who spoke louder and faster in Russian the more we told them we didn’t understand them! But Russia is a big place with a lot of different characters and stereotypes were hard to fit.

Our first day in Russia was full of mixed experiences and we were not entirely sure we wanted to be there. First of all the border was hectic, long-winded and cold. To be fair to the Russians border guards, they were really helpful and polite. The queue to get in was a different matter. Russian 4x4s and Armenian people-movers jostled to get through and we felt a little miffed as we were pushed further back.

When we got through we drove along the Chechen border for some miles, then headed to the small town of Beslan to visit the memorial of the Beslan School Massacre. It was such a heartbreaking experience. I couldn’t hold back the tears as we walked around the school, which remains as it was after (supposedly) Chechen rebels held over 1100 people hostage in 2004, killing almost 400, over half of them children. Bullet holes litter the ghostly corridors and ominous dark stains are still visible on the gym floor. The photos of the dead line the walls of the gymnasium, and flowers surround the walkways. The families have buried the victims in a nearby cemetery complete with a beautiful and moving monument, the Tree of Grief, dedicated to them. I wish we’d seen it but we were running late and it was upsetting enough already. For those wanting to visit the memorial and pay their respects, it can be found here: N43.18414 E044.54009 There is little info on Google and we had to ask around for it.

The Gymnasium at School #1 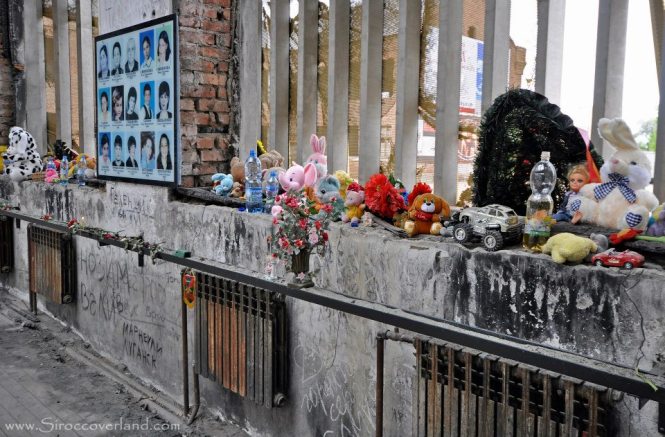 Photos of all the victims line the walls of the Gym. Gone but never forgotten.

We were stopped by a policeman looking for a bribe (OK that stereotype is true), but after 20 minutes or so of not understanding him, he gave up and sent us on our way. Fortunately for us he didn’t ask for insurance documents, as we still hadn’t found anywhere to buy it! Our first night was spent in Pyatigorsk, a surprisingly pleasant city with a European feel to it. We were also surprised to discover that drivers stopped at pedestrian crossings and the hotel was half-decent (one of the few soviet blocks that were, as we later found out!).

The following day was full of hiccups but meant we met some amazing people. We were stopped by another policeman, this time asking for the absent insurance certificate, so a few pounds lighter we drove to an Audi dealership a few kilometres on which the now helpful policeman insisted would sell us insurance. When we finally got across what we wanted, they couldn’t help and passed us around the other dealerships. But then Masha, who spoke reasonable English, arrived and not only knew where we could get it but took us there in a zippy little A1 TFSI. She spent a good hour getting us sorted, and somehow our offer of buying her lunch resulted in her taking us for lunch in the Audi canteen! Without Masha we would never have found the insurance broker and she saved us so much time and money. We are eternally grateful Masha! On top of all this, her boss, Svetlana, spoke excellent English and we told her we were heading to nearby Stavropol for a Landrover part. So she called around to see if anyone had the part (they didn’t) and gave us loads of info on other dealerships in Russia. Top class service from the marketing department and we didn’t even own an Audi! 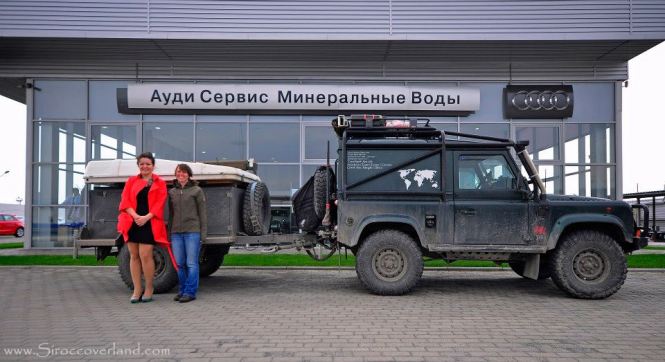 Masha and Lisa outside the Audi Dealer

After a couple of hours and several photos we said our goodbyes and made our way to Stavropol to meet Jon Beardmore, a Kiwi we’d met a year previously at the RGS xplore weekend doing a similar trip in his Land Cruiser www.bigoadventures.com. We decided to stop at the Landrover Dealership to see if they could look at some other potential issues we were having, fully expecting them to be closed as it was past 5.30 pm. Instead they were keen to look at the car, and even stayed late to temporarily fix the fan for us. We didn’t leave until after 8 pm, still with nowhere to stay. If you need some work done then the main dealer can be found here: N45.07871 E041.93956 Again people have written about the place but not given any clues as to how to find it!

After a couple more hours and several unsuccessful enquiries (we turned down by-the-hour rooms, and others wouldn’t take tourists or were full) we stayed at the extortionate Hotel Intourist. It was the stereotypical soviet dive – marble and lush carpets in reception but manky beds, broken windows and 30-year-old bathrooms. We had to park out the back as we didn’t have a BMW X5, but I guess they have standards for some things!

Next day we met with Jon and decided to stay another night but this time we camped in the same car park and bypassed the hotel altogether. We went our separate ways the next morning, us to Elista, Jon to Vladikavkaz. 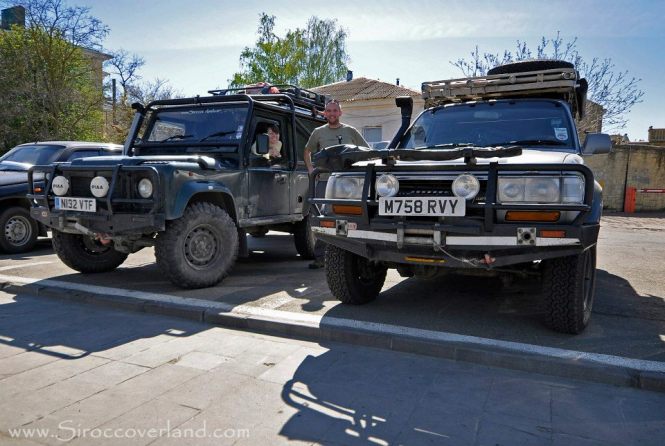 Jon’s Cruiser spotted in a car-park

Elista was completely different to what we expected. It was like a mini Mongolia, with most people being of Mongolian or eastern Asian origin. The Mongolians had settled there a long time ago but were displaced by the Russians, only being allowed back in the 70’s. Since that time they have built traditional temples and monuments, plus lots of statues of Genghis Khan. It’s a beautiful and quiet town, which felt extremely safe.

After several failed attempts to camp outside hotels, someone recommended a hotel, the 25th Chas (Hour) (N46.31390 E044.29832) that might be cheaper. Although the rooms were great and cheaper than anywhere else, we asked Slava, the owner, about camping and he took us to a local car lock-up with security and arranged for us to camp there for free. We were grateful to him for that alone, but then he bought us drinking water, filled up some of our water tank and arranged to pick us up at 7 pm for dinner. We weren’t exactly sure what was in store for us as he spoke no English and we hadn’t used our Russian much, but he took us for a Mongolian dinner, followed by an evening tour of Elista. Later he took us for more shashlik from his own restaurant, followed by ice cream. It was a fantastic day and not a drop of vodka in sight!

Monument of Genghis Khan marks the main road into Elista

We stayed again the following night, and the hospitality continued. This time a Russian couple had waited for us to return from dinner, wanting to quiz us about our trip. Their niece, Inna, could speak English after being in the UK for 8 months and they were keen for us to come to the house and eat with them. We couldn’t say no (literally – it was ignored!) so we followed them in our car to the Dyakova household, where we were given more food, English tea and home made whisky! The family was so lovely to us, especially Svetlana, Inna’s mum, who turned into a mother hen and couldn’t do enough! Poor Inna was exhausted by the end, having translated the bombardment of questions directed our way all evening! After everyone had said a toast (we were allowed to toast with tea, thankfully!) we stayed over on the family’s insistence and the fact it was 2am. Breakfast was great the next morning too, but reluctantly we had to leave. We had such a fantastic time with them and their hospitality was like nothing we’ve ever experienced. We were so glad we had given in!

We couldn’t be in the region without a visit to Volgograd (Stalingrad) to visit the Motherland Calls Statue in the Memorial Park, the largest non-religious statue in the world. It is difficult to comprehend how big it really is, but we could see it on the horizon long before we reached the park! It was an awesome sight in the fading sunlight, calling her sons to fight for the motherland. The whole park is dedicated to the many thousands of men who died in the Battle of Stalingrad in WWII, with many other poignant monuments and memorials.

Родина-мать зовёт! ‘The Motherland Calls’. The tallest non-religious statue in the world.

Whilst in Volgograd we did spot another Land Rover Parts Dealer but didn’t try them. They can be found here (N48.69963 E044.47443) if your stuck. On leaving Volgograd we headed towards the Kazakhstan border, stopping overnight in Astrakhan, and entering Central Asia proper. Now we really did feel far from home!

This entry was posted on 13/06/2013 by Lisa. It was filed under Overland Adventure and was tagged with Beslan, Elista, Land Rover Stavropol, Stalingrad, The Motherland Calls, Volgograd.