The Bearbones Bikepacking event of the year has been and gone. A lot of time had been spent deliberating/organising kit prior to the event but the weather forecast finally made its mind up making kit choice easier  (if not the answer I wanted to hear). It was going to be wet. Very wet.

The Welsh Ride Thing (for those who do not know) is a loosely organised bikepacking event held in mid-Wales over 3 days. The idea is to utilise a number of given way-points (~25) to devise a route that you want to ride over the 3 days spending the 2 nights out. There are no fixed rules and there is no ‘tagging’ at the way-points. It is generally accepted that participants will be self sufficient carrying everything they need to last the duration. It is OK to utilise shops, café’s and pubs for food/water but not accommodation! Some puritans would argue that even this is not acceptable but as there are no rules… Its not a competition either and you are not against the clock. More information can be found here: www.Bearbonespacking.co.uk

Final kit sorting Friday night we headed into Wales Saturday morning ahead of the Jubilee weekend traffic. Overcast and foggy we rolled into Ceulan at 1030. There was a plethora of bikes and kit on display, a handful were going for more riding less sleeping whilst others were going with some degree of comfort. The lightest bike with kit, water and food came in around 33lbs whilst the heaviest was 75lbs. My Salsa came in just over respectable at 58lbs. I was carrying a camera, mini tripod and camcorder though. I dropped the camcorder last minute and just went with my Leica D-Lux 3 compact and mini tripod.

After a long wait for everyone to arrive, the weigh in and raffle (I won an Alpkit towel!) we rolled out around 1330 and the field instantly split north and south along the road heading for their planned waypoints. I headed out south and east picking up a way-point near Carno Wind farm. Many riders were going this way but backtracking and taking a different route north. I decided to ride through the wind farm and found myself all by myself. After tracing my route on Google Earth I found that my route could be taken through the wind farm, passed the trig point of Bryn Amlwg (488m) and down a farm track to the A470. This wasn’t shown on any OS map.

A short run along the A470 I took a B road picking up another way-point and headed into a forest looking for way-point 1. From here the OS map shows a forest track out onto open farmland. About 1.5km in the forest track turned into a tight closed section of forest and the ground turned to a muddy bog and Sphagnum Moss. Carefully choosing your route resulted in sinking up to calf depth and this persisted for nearly 2.0km. It was tough going hauling bike and kit through this. On the other side the track was unfavourable and I decided to cut this short by cutting across a footpath to another country road. The ground was firm but I had to lift the bike over no fewer than 7 gates.

Dropping into Foel I sneaked into a camp site to fill up my water bottles then headed into Dyfnant Forest where I planned to spend the night. I had all ready exceeded my expected mileage for Saturday so was very pleased with my progress. Coming out of the forest I met Shawn (Restlessnative) from the Bearbones Forum who recognised my bike and we decided to ride together and find a place to bivi for the night. We found a small spot within the forest around 2.0km from Lake Vyrnwy. There was enough space for my Terra Nova tent and a small patch for Shawn’s bivi bag and poncho (for a tarp). It started to rain as we made camp and we knew that was it for the rest of the event. Rain. We found a small dry area undercover of pine trees so we decided to cook up there and while away the time sipping rum.

At 0300 on Sunday I was awoken by the most torrential downpour, it was really coming down. As my tent hasn’t been seal seamed I got a few drops coming in and dampening my sleeping bag. this was nothing compared to what Shawn had to endure. We got up around 0930 and rode to a cafe located to the south of the lake. Seems like everyone else had the same idea. The place was littered with muddied stead’s and inside 1000 yard stares over a ‘full English’ were the order of the day. At this point there were murmurs of finishing early as the heavy rain had pinpointed weaknesses in kit choices and clothing, generally everyone and their kit was wet to some degree. The outside thermometer on the cafe read 10 degrees C. We had some food and a pot of tea and headed off north east to pick up 2 way-points. Out in the wind and rain once more we found a fantastic bike friendly route through a dark and spooky forest. Most of the trees here were standing dead which let a lot of the rain through but a great single track descent made up for it. Out for the other way-point we got a little misplaced in another forested area and decided to cut short and pick up the road anti-clockwise around Lake Vyrnwy. It was a good move and we saved ourselves a lot of time. I knew the lake was long, but it took an age to cover the 8.5km length of the lake. We stopped to cook up some lunch at the base of Bwlch-Y-Groes and found that it does not take long to get cold in these conditions. Within 5 minutes we were both cold. Not to worry we had the highest road pass in Wales to climb riding the 6.5km route to 545m elevation. Not hanging around at the top we descended (max 48mph!) to the south.

Heading off road again we found ourselves in unridable  terrain. Bogs, fallen trees, crap gates and eventually a river crossing combined with a steep 30m high bank which we had to shoulder the bikes up. Now this isn’t usually a problem but with a bike weighing nearly 58lbs it was quite a task on a muddy slope with trees that want to stop you and slowly hurt you. We found the forest track we were looking for but after that slog I was sapped. It took a while to gather some strength and luckily after picking up the next way-point it was single track downhill for some time with some ford crossings thrown in for good measure. Dropping onto the A458 it was still a little too early to stop so we pressed on up the road to pick up another way-point before heading into the forest and climbing again. We found a camp spot that was reasonably sheltered from the wind and decided to stop there. Shawn had a drystone wall to pitch his poncho over offering him a little more protection than the night before. His inflatable pillow exploded in the night and I thought we were getting attacked by a farmer. At least it wasn’t his mat. 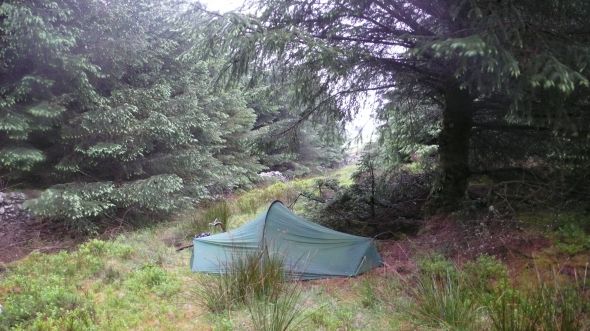 The next morning saw the attack of the midges and the madness it brings. rapid packing we were on the road by 0800. The rain had finally stopped and we dropped out of the forest on a track again spotted on Google Earth (not on the OS map) to a B road heading south to Llanbrynmair. We stopped in a cafe here for a quick coffee and some food before heading back to Ceulan for tea and cake. It was a pleasant ride on Monday morning but I was glad we were finished.

Speaking to Stu and Dee it became apparent that over 30 people had dropped out of the event over the course of Sunday and that was just the people who bothered to contact the organisers. It was nice just milling about and swapping stories with people at the finish, it was a great atmosphere coupled with a sense of achievement. While not an epic amount I rode  just under 80 miles from 1330 Saturday till 1000 Monday morning with nearly 3000m of elevation taking in 12 way-points.

Throughout my journey I took a number of small clips on my Leica and have put these together into an 8 minute video which can be found on Vimeo here: https://vimeo.com/43495223

Enjoy and until next time…

This entry was posted on 07/06/2012 by Griff. It was filed under Bikepacking and was tagged with Bikepacking, Salsa Vaya, Terra Nova, Welsh Ride Thing, WRT.