How we got super efficient with our time in Almaty, dined on fresh lamb at Kolsay Lakes and drove for days through storms to reach the Russian Border. 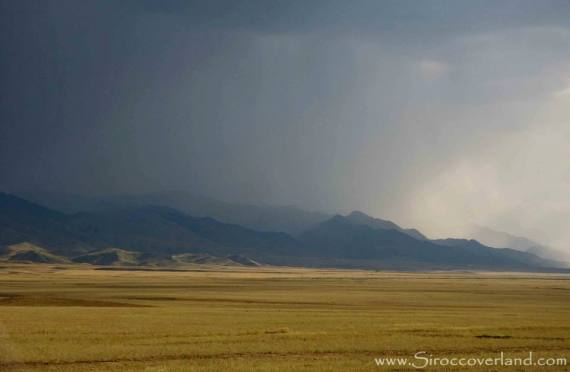 Dropping down from the mountains the rains soon gave chase

The border couldn’t have been much more farcical. First the Kyrgyz customs wanted their document (which we were never given on entry). I tried explaining we were never given one, told them which border we came in through and told them to call them as it was a ‘Kyrgyzstan problem’ not ours. Eventually after much pacing around they let us through until we tried to exit. One guy wanted everything out. He tried to take the GPS off the dash saying we shouldn’t have it, it’s a security issue blah blah blah. He tried to take the microSD card but I told him he wasn’t having it and put it in the cubby box. Then he wanted everything out of the back of the 90, so I did the usual and offered for him to take it out himself. He demanded we did it so very slowly we pulled things out. Computers first, opened the fridge then our bags. When Lisa started waving her underwear around he soon told us to pack up but we were not done yet. He kept prodding the trailer with his pointy metal stick, everything got poked. Paintwork, boxes, clothes, I was slowly starting to lose my patience with him, his attitude and his nonchalant regard for our worldly belongings.

I know it is their job and I have no problem getting our gear out for inspection, waiting at borders, filling in countless forms etc (seven hours in Uzbekistan) but this kid was wired and we didn’t like him from the start. Satisfied (or bored) he lifted the barrier and we were into Kazak territory. This went a little better however the guy in the office could not find ‘United Kingdom’, ‘Great Britain’ or even ‘England’ on his computer so we were duly stamped in as… Irish. He did the Customs Declaration for the Land Rover but would not do one for the trailer. When we came into Russia the first time there were two declarations, one for the Land Rover and one for the trailer. As Kazakhstan is part of the Customs union we had to pick up our papers here for when we exit into Mongolia later on. When I told him it would be a problem for us if he did not do it he just said there would be no problem and refused to do anything, eventually putting his feet up. We tried three to four times to convince him using other basic Russian Phrases, all of which he seemed to understand, but still, refused outright. We left the border knowing that if they didn’t pick up on it entering Russia we may still have a problem leaving Russia for Mongolia in a few weeks time. Great, another unknown.

Considering Kazakhstan is the ninth largest country in the world and the richest of all the ‘Stans’ it really does have the shittest of roads. Ok, there is a lot of asphalt down but the holes and disrepair is unbelievable! I would sooner have corrugated dirt roads in all weathers than potholes big enough and deep enough to do serious damage to even the hardest 4×4.

Having crossed the border late in the day we didn’t really have a solid plan. We needed to get to Almaty to do all manner of things, mostly register our stay with the authorities and get our Mongolian Visa. We decided it would be best to do that first, and then come back towards the border to visit Kolsay Lakes and Charyn Canyon which we were told were ‘not to be missed’. As we neared Almaty we couldn’t find anywhere obvious to wildcamp, we got closer and closer until we were only 100km east of the former Capital City. Eventually we just had to edge into a field behind some trees. The sun was setting fast so it wasn’t a problem. We had heard from others that the price of accommodation in Almaty was ridiculous, there were no cheap options. We were looking at around $75 a night for the cheapest of cheap. With the alarm set for 0600 we would get in and out the same day.

As we approached from the east the traffic soon started to build. It was only 0700 and already we were approaching stop start traffic. We spotted a cluster of insurance booths on the edge of town so pulled over and spent the next hour trying to arrange that. With that in the bank we headed for the Mongolian Embassy. The thing we noticed immediately about Almaty was that it was wealthy, it was big and it was quite nice. The roads were now good to but the traffic was horrific. Luckily Open Street Map on the GPS weaved us through the mellay of streets and highways to reach our destination. Too early (can you believe that!?) for the Embassy we fuelled up both tanks and took a wedge load of cash from the ATM at the fuel station and went back. We were the only people at the consulate on the edge of town and within 20 minutes our passports had the visa’s in (for the $54 nominal fee) and we were on our way! Next stop the OVIR office for registration. After some searching on the internet in Bishkek I had what I believed to be the right coordinates so we parked up and went inside. It was mayhem, but 30 minutes later we were back out on the street looking for somewhere to eat while we waited for our paperwork to be processed. If you need to register yourself in Almaty, you can do so for free, just read our previous post here: Registering yourself in Almaty. Right across the street was a huge Land Rover sign over an autoshop so we went inside for a look. They were stockists for Britpart and had a huge array of parts… except for a Defender door handle. So we took a few filters, had a chat with the guys there, deciphered the English business speak email they couldn’t understand (from Britpart) and headed back out. When we went to collect our immigration papers we bumped into the Austrians who we had spent time with in Uzbekistan and later in Tajikistan. It was good to see them again after many weeks and a few thousand kilometers further along the road. We picked up a new hard drive for the computer and got a load of food in before driving out of Almaty and back towards Kolsay Lakes. 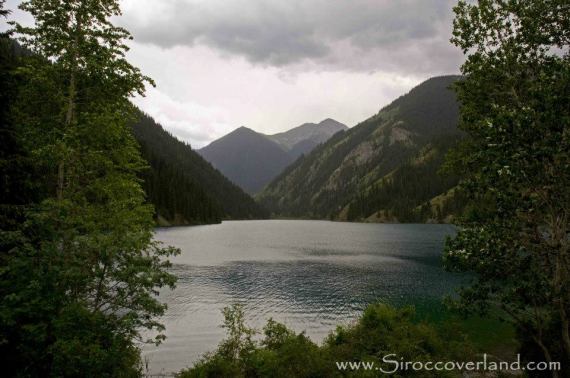 The following day on route to the Lakes we bumped into a group of Estonians in three well prepared Land Cruisers. They were on a short trip through Central Asia filming for an Estonian TV channel. It seems the public there enjoy 4×4 exploits on TV! When we arrived at the lakes, it turns out you cannot camp very easily with your vehicle. You cannot actually get anywhere near the lake and the Nazi like officials didn’t know what to do with us. We ended up camping on some waste ground near some holiday homes when it started to rain. After making friends with another scabby dog who smelled so bad I gave it a wash, we went for a short walk around the lake and back (with the dog). 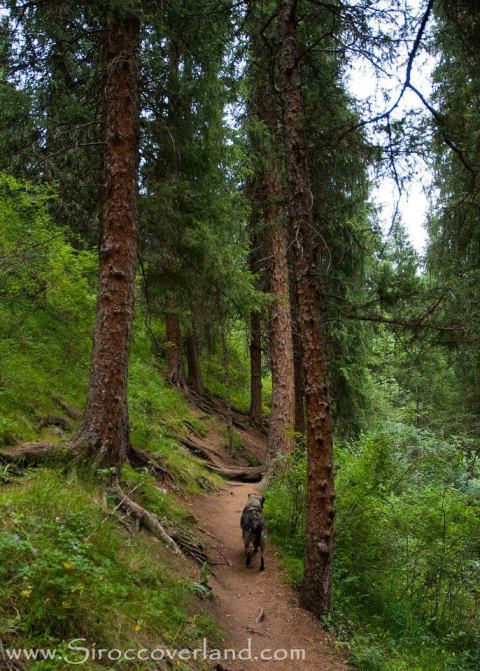 Out with our new friend ‘barking mad’

In the meantime a Kazak family turned up to occupy two of the holiday homes and in their Transit van was a sheep. It was led out of the van and down a hill and into the long grass where it returned back up the hill on serving trays. After a few hours sitting under the awning drinking tea in the rain we were invited in. After a few rounds of Vodka and Cognac two of the men started to hack the pieces of lamb apart. No master butchery here, everything was bashed and smashed with all kinds of implements on top of the bedside table. When they had the ‘cuts’ they wanted we went outside, started a fire and started to make some form of Kazak shashlik in a cast iron pot. A few simple veggies thrown in with some tomato paste and herbs and it was done. More Cognac was consumed and in their drunkenness invited us to stay with them in Astana (He was after all, Presidential Security) ‘Sure’ I said whilst endlessly chewing a ball of lamb fat, ‘sounds like a great idea’ it was only 1000km out of our way. 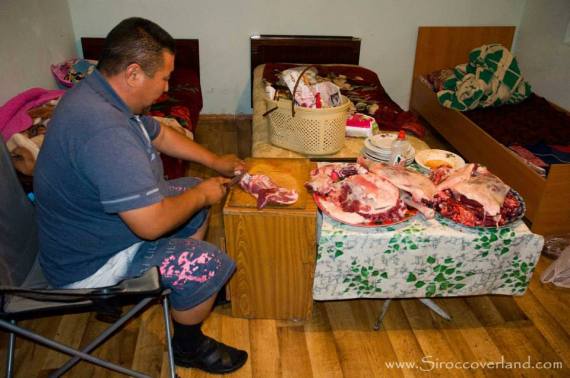 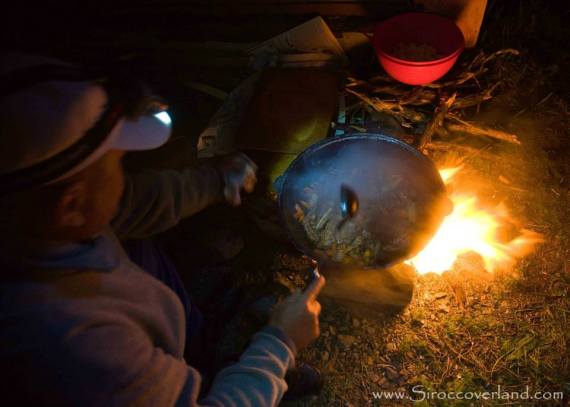 Cant beat cooking outside in the rain

The next morning we looked at the map and realized that we would lose days going to Astana so apologized to the family who willingly accepted. We all went fishing and I managed to reel in 3 small trout. So small, they went back in. That afternoon we said our goodbyes and left for Charyn Canyon. 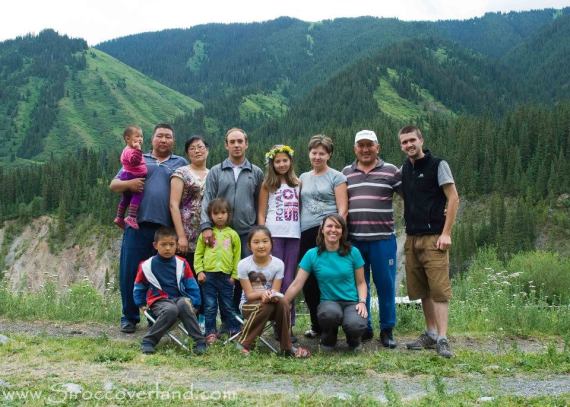 What a let down, don’t waste your time. We put a few more K’s in before calling it a night. Our wildcamp that night was occupied by an eagle and gale force winds. On the road the next day the weather got worse and it rained, it rained more or less non-stop for the next 4 days. After 9 nights wildcamping we decided that we had earned a hotel and more importantly a shower, so we stopped off in Taldy Quorgan for the night. The following few days were uneventful. It continued to rain, the roads were horrific, diversions were mudbaths and our awning snapped… again. We enjoyed our hotel stay at Taldy Quorgan so much we decided to get another in Semey before crossing the border. It was here we met up with the Jaba Mundus boys (Andrew and Jon) on two wheels. You can read about their exploits here: J.A.B.A MUNDUS These boys had covered ground so quickly you wouldn’t believe! They left the UK months after us, had caught us up and before we even reached Siberia were on another continent! (North America). On the approach to the border with Russia the following morning they stopped to say hello whilst we were making a cup of tea. They got ahead of us at the border but having not registered in Almaty found themselves in a bit of trouble. We processed through before them but they soon quick talked their way out of it (with several large excuses!) so we all rolled on to the Russian border post together with the Altai ahead of us. 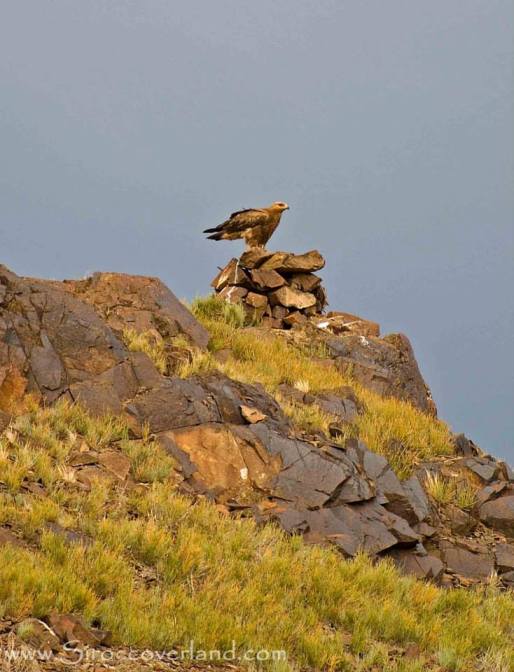 This entry was posted on 16/09/2013 by Griff. It was filed under Overland Adventure and was tagged with Almaty, Border, Kazakhstan, Kolsay Lakes, Mongolian Embassy, OVIR, Registration.