Crossing the border from Slovenia was an easy affair as we motored south along the motorway down towards Pula out in the Istria region of Croatia. Back in a familiar country we felt at home, even if we had not visited this part of Croatia before. Studying the maps we decided to come off the motorway after a short period and head down to the coast along some unpaved routes. We had done this on a moped back in 2006 and found some great secluded coves and inlets so in the Land Rover it should make for some excellent wild-camping this time around. Passing several closed camp sites there were many signs saying you could not stay overnight, no fires etc but we continued on.

Coming off the graded gravel track we found a rough rocky route which led us right down to the shoreline, perfect. We had only passed 2 people on our way down here in the last 5km since leaving the asphalt so we were fairly certain we wouldn’t get disturbed. Up and down the shoreline we could see for miles, with no infrastructure and nobody as far as the eye could see. Out with the fishing rod I set off to bring back something for tea, but as usual nothing. Just as I was making my way back to Lisa I spotted two men heading our way, they looked official, even from a distance! They walked along the rocky shoreline, said hello and carried on. They were Police and we guessed they were checking to make sure nobody was camping out here. When we got back to the Land Rover, their car was parked next to us. The sun was setting fast and we needed to make a decision…we had to go. Heading out we realised it was a dead-end route and that we were in an Ornithological Park. After stopping to take pictures we found the Police waiting at the head of the unpaved road for us to exit and leave the area. We travelled on for quite some time that night but found somewhere else quiet enough and out of the way until the next morning.

Rising early we woke to find we were only camped about 300m from a church. Luckily there was nobody around and we continued on, off-road for a further 20km. Passing Pula we took the D8, Adriatic Highway past Rijeka and south towards Zadar. Peeling off north we immediately started to ascend high into the mountains. Within 15km there was a good covering of snow and after 50km we were back to seeing 3-4ft of the white stuff all along the fields and forests. Just as we had got use to the sun, the snow was back! The other realisation for us was that we knew there would be no camping, wild or site. Heading into Plitvice National Park there was a number of places offering ‘rooms’, however most of these looked closed. We stopped at one or two but no answer. Eventually we stopped at ‘House Ana’ and got a warm welcome from the owner and her family, so much so, we stayed for 2 nights.

Plitvice National Park is probably best known for its cascading lakes and it is a huge attraction in Croatia bringing in people from all over the world due to UNESCO status. As usual for us at this time of year, the majority of the walks were closed due to ice/snow so we were restricted to the lower lakes only. Nevertheless this included some of the best features found here including the cascading lakes and large waterfall. With our packed lunch and flask we took a leisurely walk around, setting up the camera at every opportunity. The lakes were not at their best at this time of year, but there were no crowds. After midday we only saw a handful of people. 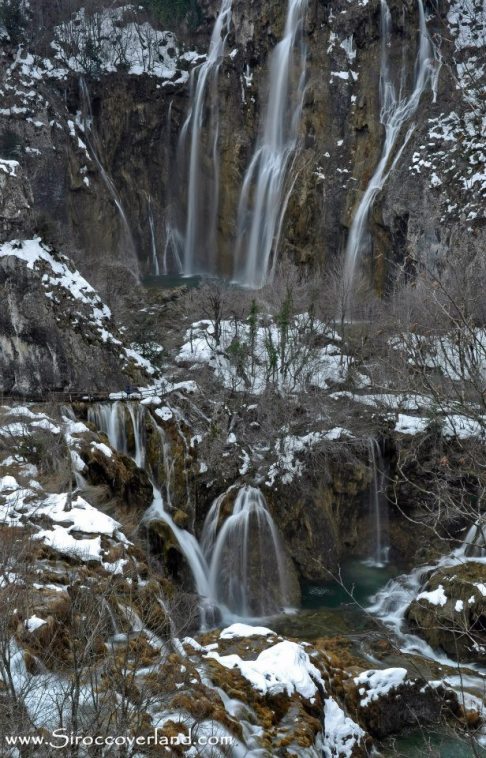 As we headed toward Split for our final couple of nights in Croatia we passed through some desolate parts of the country not seen on the coast. With many buildings in ruin, abandoned and long forgotten, we realised that this region of Croatia had been victim to the war in the early 90’s. We also took a look at the Mali Alan Pass but this was closed due to the amount of snow covering the road. Taking another back-road we passed signs warning of land-mines as we wound our way around the mountains and through floods. We reached Split in the dark but found a great camp site at Stobrec where we enjoyed a bit more sun and seafood (home cooked this time).

Leaving Croatia and its familiarity, we headed out of our comfort zone to the border with Bosnia & Herzegovina and Mostar.

This entry was posted on 13/03/2013 by Griff. It was filed under Overland Adventure and was tagged with Croatia, Istria, Mali Alan Pass, Plitvice Lakes.