After almost a week back in the UK I flew back to Munich Airport where Griff picked me up and took me to the campsite he’d found in Landshut, a surprisingly large town northeast of Munich. It was a beautiful town, complete with snow (which I’d forgotten about while back home), and bars and restaurants aplenty. One in particular had caught Griff’s eye, a lovely rustic looking place with chunky wooden tables awash with candlelight, perfect for a romantic dinner. Having established that yes we would definitely like to eat there, it was (ahem) agreed that we would walk around another hour before going back for dinner. But on returning we found it was full and could not eat for a few more hours! We were so disappointed!

However, after some more wandering we came across a typical Bavarian pub with hearty food on the menu, and they could squeeze us in if we could be out in 40 mins. Easy peasy – we were now starving! I ordered the “typical Bavarian” meal of half a pig accompanied by potato dumplings and cabbage while Griff replaced the pig with an amazing sizzling duck served in a hot pan. Being on such a tight schedule, our food was prepared at lightening speed, but the portions were so big we only just finished in time and I had to drink my beer by the door!

The next morning we made our way to Bannwaldsee where we found an open campsite close to Neuschwanstein Castle. We had almost visited the castle on a previous trip to Munich but felt the many hours on a coach was not an enjoyable way to spend a long weekend. So having our own transport while in the area meant we just had to go.

The castle is just above another, probably more functional, castle and that evening as we headed to nearby Fussen to pass the time and grab a cheap dinner, the snow was so heavy we could barely see the lower one let alone Neuschwanstein! We were worried our detour would be a waste of time but we were in luck – we woke the next day to glorious sunshine (and minus 15c)! We took a stroll up to the castle and waited for our allotted guide time. The English speaking tour was mostly full of Japanese tourists – Brits are the minority, so much so they have replaced the Union Jack with a US flag to represent the English language! I think that (most) Americans are aware they speak English, and don’t require a picture of their flag to recognise it, but maybe German experience dictates otherwise. (As for Aussies, Kiwis and other English speaking nations, they will have to visit more often if they want the same treatment!) Anyway I digress.

The medieval-style castle is actually not that old, built in the late 1800’s on the site of a medieval ruin by King Ludwig who it seems had a burning desire to build as many fantastic castles as possible throughout Bavaria. He never even got to finish this one before he, along with his psychiatrist, was found dead in Lake Chiemsee age 41 (probably murdered for spending the family fortune but it’s a mystery that’s never been solved).  A local stage painter, Christian Jank drafted the building design, and the many wall frescoes feature scenes from works by Richard Wagner, a personal friend of Ludwig’s. 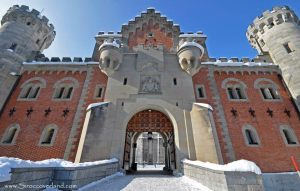 Unfortunately photos were not permitted inside the castle, as the décor is original and exclusive to the castle, often designed by Ludwig himself. Particularly impressive was the wooden canopy over his bed, a gothic creation which was carved by 14 carvers over more than 4 years and contained the pinnacles of many of his previous castles. Not many of the rooms were finished, including the entire second floor, and his throne room never even saw a throne as he died before it was made. It did however possess a fine mosaic floor with seemingly millions of small tiles. The chandeliers were in the style of huge Bavarian crowns with Bohemian glass stones instead of jewels, but still precious and just as beautiful. The man had extravagant taste, and an eye for detail. Swans were incorporated into much of the décor, such as door handles and paintings, as these were his favourite animal and a symbol of Bavaria.

We were disappointed that the surrounding walks were out of bounds due to snow, as there was a lovely footbridge crossing between the mountains behind the castle, and we were hoping to get a view of the castle from above. But the scaffolding around the base of the castle made sure even Griff couldn’t sneak around!

So apart from being annoyed about the Union Jack (could you tell?), not being able to take photos and not being able walk around the mountain, it was well worth the visit.

It was great to see the castle in the snow, just as a fairytale castle should be. If we had been feeling lazy we could have gone one step further and taken a pony and cart to or from the castle, but as we have done little in the way of exercise since leaving the UK we felt the need for a good stomp to the top!

This entry was posted on 06/03/2013 by Lisa. It was filed under Overland Adventure and was tagged with Bavaria, Fussen, Germany, Neushwanstein Castle.