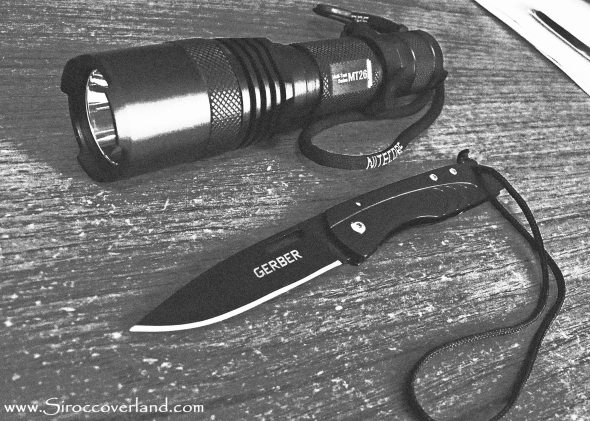 New to the stable in recent months are the little known Nitecore brand of torches and the well known German blade and multi-tool manufacturer Gerber.

I have been looking at torches a lot recently and became hopelessly lost in the specification and jargon of ‘flashlights’. Lumen’s  throw, beam distance, LUX etc I tried to make sense of it all. I looked at Surefire, Fenix, Lenser, Maglite, Petzl… all the big players. If you to thought, like me, quite simply that the more Lumen’s the better then you would be mistaken.  As with most things it depends what you want your torch to do. Do you want it to light up an enclosed space or put light downrange to 500m? I all ready have a 2D LED Maglite in the Land Rover, its heavy and cumbersome but puts light out to nearly 400m with a measly 134 lumen’s  the problem with the ‘Mag’ (other than being heavy and cumbersome )is that the beam or ‘throw’ is very narrow. I wanted something else to compliment the Mag that I could take anywhere. It had to fit in a pocket, be powerful, reasonably light, enough lumen’s to light up a room, a forest, a campsite but not particularly be good at range. I narrowed my choice down to a Fenix PD32 with 320 lumen’s at its highest setting. A good size, good lumen’s and not a bad price. I was about to pull the trigger on Ebay but I continued my search. I stumbled across Nitecore and their MT2C model which was similar to the PD32 but at a better price point. I started looking around and for a few more £££, slight increase in size and weight I could get the MT26 with a high output option of 800 lumen’s  Packed with the usual flashlight features, 6 brightness settings from 25 to 800 lumen’s and submersible to 2.0m depth. 2 brightness settings can be selected so you have these on hand at all times negating the need to cycle through all 6 at a time. Its a sturdy and well made torch which I am very happy with.

I have a few Gerber products now which see a reasonable amount of use and I am continually impressed with their function. For some time I have wanted a smaller folding knife to carry (so I can leave my Opinel No.10 in the Land Rover) and have always liked the look of the STL (Strong Thin Light). the 2.5 version is slightly bigger than the original but keeps the blade within the UK legal carry limit. At a pinch over 40g in weight you wont notice your carrying it either. the frame locks the blade open and the whole thing is incredibly well balanced and sturdy in use thanks, in part, to the machined stainless steel body. For £10 you would be hard pushed to find an equally good drop point folding knife. I will update this post once its seen some action and we will see how long the fine edge lasts.

This entry was posted on 22/11/2012 by Griff. It was filed under Gear Talk and was tagged with Gerber, Knife, Nitecore, Torch.